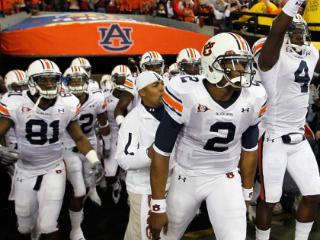 The Auburn Tigers are landing in Pasadena this New Year’s Eve getting ready for the BCS National Championship.

Tuesday morning they boarded planes in Montgomery to make the trip to California.

Auburn fans of all ages bundled up and came out to send off their Tigers, and they came from near and far to be there.

“There are a lot of people that wouldn’t make it to Pasadena. We thought this was a great way to let them know Montgomery supports them. We’ve been thrilled. We’ve got people as far as Mobile, Atlanta, Gadsden, all over. Se we are really excited,” said Dawn Hathcock of the Montgomery Area Chamber of Commerce.

Satchel Thorington says, “I am extremely excited. I woke up at 5 o’clock in the morning to get ready to be here.”

The team arrived at the airport about 10:30 am. They had already been through security clearance and went straight to board the planes.

Brandon Thornton held his 3-year-old son wearing an Auburn helmet. He says, “very excited, Braden here, thought he may be able to get on the bus since he came dressed like this.”

Coach Malzahn took a few seconds to wave at the crowd and thank them.

“We’ve got the best fans in college football no doubt,” said Malzahn.

Fans tell us they appreciate him in leading their team to the national championship.

Auburn will take on FSU in the BCS National Championship in Pasadena January 6th.