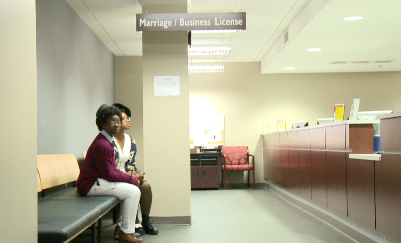 Same-sex marriage is officially legal in Alabama. Monday, couples across the state went to probate offices that are issuing marriage licenses, including Montgomery County. Shante Wolfe and Tori Sisson camped out overnight to get their marriage licenses. They were first in line at the Montgomery County Probate office to get their marriage license after dating the last two years. “We’re pretty excited we’ve been waiting for this anxiously all weekend it’s like a build up and it’s just crazy,” said Wolfe. Wolfe says it was crazy not only because of how special the day was but also because of the media frenzy. At eight a.m. the couple walked into the probate office to fill out paperwork before saying their I do’s. “All love is equal it’s fair and it’s just and that has to be recognized and there’s organizations like HRC like some of the other organizations that are on the ground that have been doing this work and so there a support system for people who are trying to just get married trying to just be like everyone else we’re not trying to cause havoc we just want to be in love that’s it,” says Wolf. The couple says it was a fairly smooth process to get a license at the Montgomery Probate office.