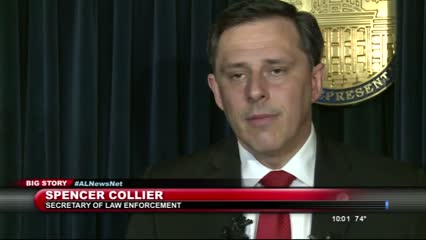 A dire warning tonight about the proposed cut to the state’s law enforcement agency budget.
ALEA Secretary Spencer Collier says the proposed 30 percent cut to their department would put Alabamians in danger.

“This budget, these numbers are atrocious.”

That’s the message Alabama Law Enforcement Agency Secretary Spencer Collier wanted to get across to the legislature Wednesday afternoon. Collier is protesting a proposed 16 million dollar budget cut to his department.

Collier says if the general fund budget passes as is, they’ll be forced to work with less staff.

Senate President Del Marsh says he understands both sides on the issue but says it’s a tough situation.

“I don’t know what else to tell Commissioner Collier or any others that come into my office everyday. We have a limited amount of money in this state to deal with those agencies that needs those dollars and we’re doing the best we can.”

In addition to layoffs, Jarrett says if this proposed budget passes, troopers would only be able to do these three tasks; investigate crashes, fingerprint and issue drivers licenses. Nothing more.