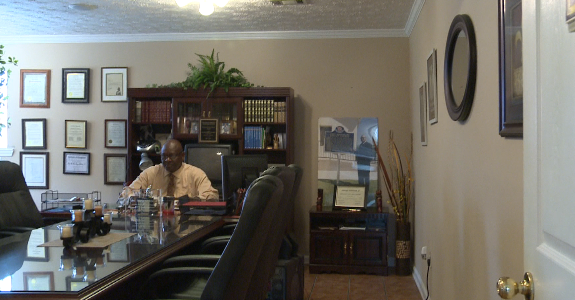 A Pike County pastor is marking another year at his church, but this anniversary is one for the history books. He’s the longest serving pastor at the oldest historically African American church in the area.
If George Gilchrist keeps track of all the Sundays, that’s more than 1,700 services as a pastor at the First Missionary Baptist Church in Troy. “It’s the oldest historic African American congregation, we are the first congregation in Troy,” he said. This year is also a historic year for Gilchrist- he’s now the longest serving pastor in the church’s 143 year history. Just as the building’s changed so to has the environment of the city outside. “I’ve seen African Americans on the police force. I’ve seen African Americans own their business, be entrepreneurs. I’ve seen a lot of things happen. I think Troy University is really the driving force behind Troy,” he said.
And it’s the people who Gilchrist says are a driving force for him preaching for 34 years and counting.
“Just a number of people I’ve baptized, led to the Lord. And see them grow up, go into their own individual professions, it’s a very humbling experience. One that I’m not worthy of, and one that I’ll cherish for the rest of my life,” he said.
Gilchrist says he will continue to preach at First Missionary Baptist Church as long as the Lord could use him there.
The church is  on the Alabama Historical Commission’s list of registered historic landmarks.
Categories: Faith Matters