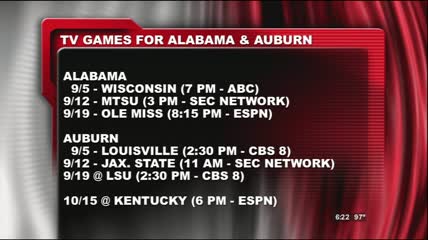 MONTGOMERY, AL — Start times for several Alabama and Auburn games have been announced.

Alabama will face Middle Tennessee State at 3 pm on September 12th on the SEC Network. They’ll look for revenge against Ole Miss at 8:15pm on ESPN the following week.

Auburn will face Jacksonville State at 11am on SEC network on Septembeer 12th. The Tigers face Kentucky on ESPN at 6 pm the following week.