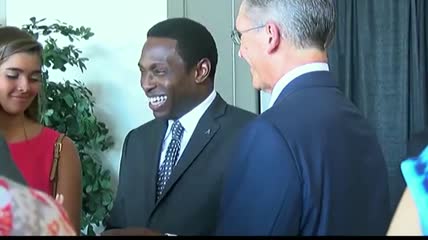 NATCHITOCHES, La. – Alabama men’s basketball head coach Avery Johnson was one of 11 newest members to be officially inducted into the Louisiana Sports Hall of Fame Induction Ceremony and Dinner on Saturday evening in front of a sold-out venue at the Natchitoches Events Center.

Johnson was joined by former NFL players Kevin Faulk and Jake Delhomme, along with coaching legends Pat Collins, Yvette Girouard and Otis Washington among other greats who were chosen for the 2015 Louisiana Sports Hall of Fame Induction Class.

Johnson, who was named the Tide’s 20th head coach in program history on April 8, 2015, is a native of New Orleans who was a standout performer at St. Augustine High School. After spending two years at the junior college level, Johnson played his final two collegiate seasons at Southern University, leading the NCAA in assists both years. He was named the Southwestern Athletic Conference (SWAC) Player of the Year and the Most Valuable Player of the SWAC Tournament as both a junior and senior.

He still owns several NCAA Division I records, including most assists in a single game (22 – shared with two other players), most games with 20 or more assists (4), the highest single-season assists average (13.3) and the highest career assists average (12.0). As a senior in 1988, he averaged 11.4 points and 13.3 assists per game, making him the first men’s Division I player to average double figures in points and assists in the same season.

Despite his numerous amateur accolades, Johnson was not selected in the 1988 NBA Draft. He started his professional career playing with the Palm Beach Stingrays of the United States Basketball League before signing as a free agent with the Seattle Supersonics on August 2, 1988. Johnson went on to play point guard for six teams in the NBA for 16 seasons, averaging 8.4 points and 5.5 assists in 1,054 regular-season contests. He led the NCAA in assists twice at Southern (10.7 per game in 1986-87, 13.3 in 1987-88) while his career 8.97 average set a new national record. His top NBA scoring season came in 1994-95 with San Antonio when he posted a 13.4 average, and a year later was third in assists in the league at 9.6 per game behind John Stockton and Jason Kidd.

Known as “The Little General” for his on-court leadership and diminutive stature, Johnson helped guide the San Antonio Spurs to an NBA Championship in 1999. On March, 28 2003, as a member of the Dallas Mavericks, Johnson became the 75th player in league history to play 1,000 career games. At 5-11, he joined Calvin Murphy (Houston Rockets) as the only other player under six feet in height to reach that milestone.

He is still the Spurs’ all-time leader in assists (4,474) and ranks 28th in NBA history in the same category. In recognition for his contributions to the Spurs organization, Johnson’s No.6 jersey was retired in December, 2007.

Johnson also has had a successful coaching career at the NBA level, owning a 254-186 (.577) career coaching record after spending four seasons with the Dallas Mavericks and two-plus seasons with the Brooklyn Nets. During his time in Dallas, Johnson led the Mavericks to the postseason in each of his three-plus seasons as head coach. He led the Mavericks to a record of 194-70 (.735) and set an NBA record for reaching the 50-win plateau (62 games) and the 150-win plateau (191 games) the fastest of any head coach in league history. In 2005-06, Johnson led the Mavericks to their first appearance in the NBA Finals en route to earning NBA Coach of the Year honors.