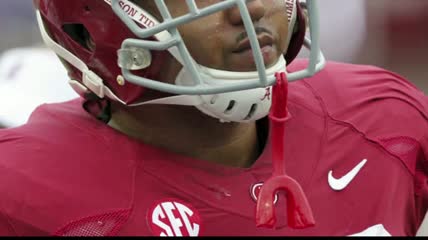 Houston, TX – The Houston Texans have released defensive lineman Brandon Ivory a day after he was charged in a residential burglary in Tuscaloosa.
The team announced his departure on Thursday. The 23-year-old Ivory, a former Alabama standout, signed a free-agent contract with the Texans in May.
Police said Wednesday that Ivory was arrested with a second man after two people said two men busted down a door and took two Apple iPads and cash. One of the suspects was allegedly armed with an assault rifle and the other had a knife.
Ivory and the other man, who police identified as Nicholas Gerald Gibson III, were both charged with two counts of burglary.
Ivory was a two-year starter at nose tackle at Alabama. He signed with the Texans as an undrafted free agent in May after he wasn’t selected during the NFL draft.
(Copyright 2015 The Associated Press. All rights reserved. This material may not be published, broadcast, rewritten or redistributed.)
Categories: Alabama, Video