He and his cousin killed, their bodies apparently dumped in Macon County 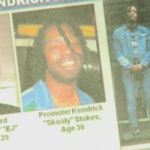 A rapper who performed under the name Bambino Gold was buried in Montgomery today.

Edward Reeves funeral was held at Bethel Missionary Baptist Church.
Reeves and his cousin— Kendrick Stokes—were murdered. They had been  reported missing on November 5, and their bodies were found in a wooded area in Macon county last week.
No arrests so far,
Reeves leaves behind a son.
His father tells Alabama News Network that he was a good man who would do anything for anyone.
Stokes funeral will be on December 2nd at Free Will Baptist church in Montgomery.