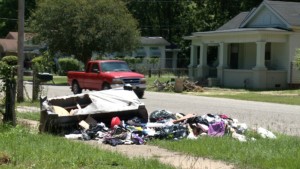 Selma residents are talking trash about the effectiveness of city leaders.

Trash has been piling up along city streets for several weeks and residents want it cleaned up.

Residents say the piles of trash have been left sitting there so long that people have started to throw garbage into the piles too.

“That says that the city is not doing what they’re suppose to do as far as keeping Selma clean,” said Anna Hardy.

“Its in every ward. The trash is all over eight wards in this city,” said Thomas.

“Trash is sitting up on every city right of way in the city of Selma.”

We contacted the mayor’s office to get a comment about the issue.

We did not hear back.