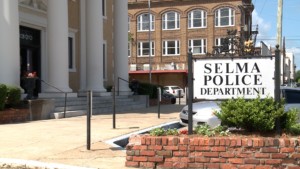 A Selma woman is dead and her son is clinging to life after they’re shot during a drive-by shooting in Selma.

They say 36 year old Brean Williams was killed in the shooting and her 17 year old son is in the hospital fighting for his life.

The shooting happened in front of a house on the 400 block of Young Street.

Police Chief Spencer Collier says Benjamin was already wanted on an attempted murder charge from a shooting a week earlier.

“Its pretty clear that he is a danger to the citizens of Selma, to the public safety and common good of this community,” said Collier.

“At this point we have no choice but to treat him as the threat that we believe he is to the people of this community.”