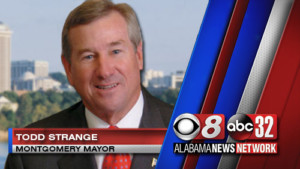 Montgomery Mayor Todd Strange delivered an optimistic budget message for fiscal year 2019. He says the budget forecasts revenue of $250 million, the first time the city has ever reached that milestone.

Strange made his comments at Montgomery City Council on Tuesday night as he unveiled his budget proposals. It will be up to city council to decide whether to approve the mayor’s ideas.

For fiscal year 2018, Strange says revenue is expected to be nearly $243 million, with expenses at below $242 million. As a result, he says the city can boost reserves to $26 million, which is about 10% of the the sanitation savings would come from fuel, equipment and similar operational items.

So just how will the city pay for the proposed budget increase?

Officials want to clarify that there would be no job cuts in the city’s sanitation department, only one less day of garbage pickup per week. To help make up for the lost day, the city would extend service at the Saturday pickup point locations from twice a month to every weekend.

The proposed budget will be up for discussion at the next council meeting on August 23rd.

Some additional statistics from the mayor’s message: