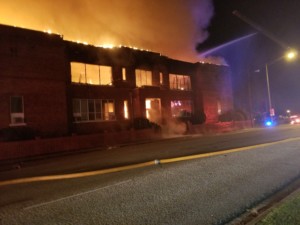 A fire has destroyed part of Booker T. Washington Magnet High School School in Montgomery. The fire started around 3 a.m. this morning, according to Montgomery Public Schools spokesman Tom Salter.

Salter says the fire happened in BTW’s building C. That portion of the campus housed the cafeteria, counselor’s offices, the photo studio and a number of classrooms. The building is a total loss, he says.

The administrative building, on the west side of Union Street, was unharmed.

Meanwhile, Salter says BTW faculty and staff should report to the main building this Monday morning at their regular time to assist in getting items ready to be transferred.

Salter says parents will receive more information via telephone and email later today and over the next few days as information is available on the move to the new temporary location.