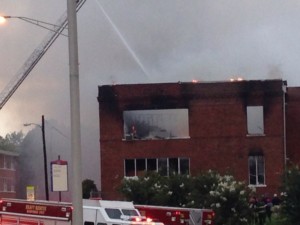 Every school has a history that includes the faces of students, the commitment of teachers and a treasure trove of memories. But Booker T. Washington Magnet High School in Montgomery, which was partially destroyed by fire early yesterday morning, has a history that extends to the Civil War era.

Booker T. Washington School began in early 1865 as a primary school for black children, in a time when they couldn’t attend classes with white students. The first graduation was held in 1904. The school grew so fast that an additional building was erected at Union and Grove Streets in 1916.

In 1937, plans were made to open a senior high. A thirty-room unit was constructed after several of the original structures were demolished in 1948. A 123-foot underground tunnel was developed to connect each side of the campus. The adjoining auditorium-gymnasium was constructed in 1954.

Today, Booker T. Washington (BTW) Magnet High School is a public, inner-city magnet program that was derived from the Carver Creative and Performing Arts Center (CCPAC). CCPAC was developed in 1982 to accommodate the growing need for specialized arts instruction for students within the Montgomery County School System. CCPAC grew from four arts areas to sixteen arts areas from 1982 to 1992.

In 1996, a federal grant enabled the school to become a designated magnet school housed on the campus of the old Booker T. Washington School.

In its history, the administration, faculty, and staff have worked to promote excellence for all students. BTW remains dedicated to the student-created motto “Excellence in All Things,” and each student is expected to perform at his or her highest level of ability. Teachers and students recognize the need for the arts in daily life, and all areas of the school emphasize the principles set forth in the Comprehensive Arts Based Instruction (Discipline- and Arts-Based Education).