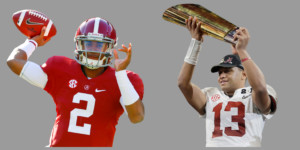 Coach Nick Saban isn’t saying who will start at quarterback for No. 1 Alabama in the season opener Saturday against Louisville.

Saban said Monday he hasn’t made that decision yet and won’t say if both Tua Tagovailoa and Jalen Hurts will see action.

Hurts, a two-year starter, and Tagovailoa have been competing since the freshman from Hawaii’s heroics in the national championship game.

Alabama has won 26 of the 28 games Hurts has started. He had complained early in fall camp of how coaches had handled his situation, saying they never asked how he felt.

Tagovailoa helped bail the Tide out of a 13-point hole in the national championship game against Georgia, heaving the winning touchdown pass to DeVonta Smith.