Is the Relationship Between President Trump and Attorney General Sessions “Beyond Repair”? 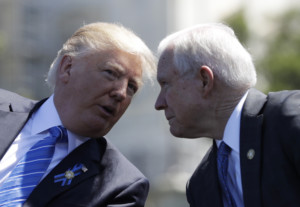 Graham told NBC that the Justice Department needs a leader who can work with the president and that Sessions was not the only person for the job. But he said anyone picked to replace Sessions would have to commit to allowing special counsel Robert Mueller to finish his investigation into Russian election interference and potential coordination between Russia and Trump’s 2016 campaign.

The comments represent a stark turnabout for Graham, who served with Sessions on the Senate Judiciary Committee and who said last year that there would be “holy hell to pay” if the attorney general was fired.

Meanwhile, Senate Majority Leader Mitch McConnell says he has “total confidence” in Sessions and suggests President Trump should not try to replace him. McConnell told reporters that Sessions “ought to stay exactly where he is.”

While Graham has said Trump could consider a new attorney general after the midterm election, McConnell outlined a busy fall agenda that did not include plans for confirming a new Trump pick at the Justice Department.

Sessions is a former U.S. Senator from Alabama. He also served as Alabama Attorney General.