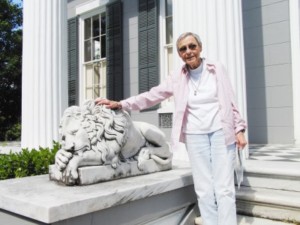 Photo from Landmarks Foundation of Montgomery

Neeley had served as executive director of Landmarks Foundation of Montgomery, a non-profit organization dedicated to historic preservation, from 1979 until 2003. Neeley was the author of several books on local history and was considered by many as the go-to person for insight into Montgomery history. She was interviewed frequently by Alabama News Network and other media outlets.

“It is with great sadness that Montgomery mourns the passing of its senior historian, Mary Ann Oglesby Neeley,” Dr. Michael W. Panhorst, the Executive Director of Landmarks Foundation of Montgomery and Old Alabama Town said in a statement.

“A tiny woman with a huge heart and an expansive grasp of Montgomery’s history, Mary Ann shared her enthusiasm with countless people through her work as a teacher, author, and as director of Landmarks Foundation of Montgomery’s Old Alabama Town (1979-2003). Our thoughts and prayers are with her family and friends in this time of grief,” he said.

Neeley earned bachelor’s degrees in English and history from Huntingdon College and a master’s degree in history from Auburn University. She was an adjunct instructor at Auburn and Huntingdon.

She was married to Aubrey Neeley. The couple had three children, six grandchildren and four great-grandchildren.

Funeral arrangements haven’t yet been announced.

Montgomery, AL…Mary Ann Oglesby Neeley, author and official historian for the city of Montgomery, was born in Montgomery, Alabama, as a seventh generation Alabamian.

A lifelong love of history, especially that of Montgomery, lead her to become a valued collaborator, speaker, and author.  Her walking tours of downtown Montgomery and Oakwood Cemetery were extremely sought after opportunities for both locals and visitors to share her enthusiasm and knowledge of local history and lore.  Developing an annual symposium called Cultural Crossroads, she brought together academia, writers, and others who explored historical topics drawing attendees from across the region.

Neeley was executive director for Landmarks Foundation of Montgomery, a non profit organization dedicated to historic preservation, from 1979 until 2003.  In addition to Cultural Crossroads, she created a variety of signature programs designed to engage young and old in the foundation’s mission to preserve, interpret and present Central Alabama’s architecture, history, and culture.  Although James Loeb launched Old Alabama Town, administered by Landmarks, Neeley continued his leadership, passion, and determination to strengthen its place in Montgomery’s history along with Loeb’s work with the downtown riverfront and overall cultural community.

She was married to Aubrey Neeley and resided in the historic Old Cloverdale neighborhood.  They are the parents of three children Rand Neeley (Julia), Forrest Neeley (Mary Alma) and Ellen Neeley Young (Lee), grandparents of six and great-grandparents of four.