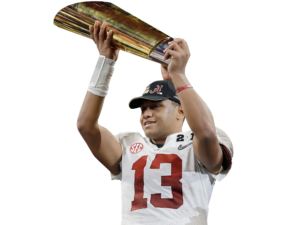 Nick Saban made official what anybody who has been paying attention to No. 1 Alabama already assumed: Tua Tagovailoa is the Crimson Tide’s starting quarterback.

The top-ranked Crimson Tide’s coach didn’t wait for the question to be asked Monday before saying what even he figures “everybody knows.” He says two-year starter Jalen Hurts will still play a role.

Tagovailoa, the hero of the national championship game against Georgia, made his first start in a 51-14 victory over Louisville . Start No. 2 comes Saturday against Arkansas State.

The sophomore from Hawaii was 12-of-16 passing for 227 yards and two touchdowns and also ran for a score in the opener.

It had become a touchy subject for Saban after repeated questions about the starter leading up to the game. Saban got testy with an ESPN reporter following a postgame quarterback question.

The Latest: Sports stars to be exempt from UK quarantine