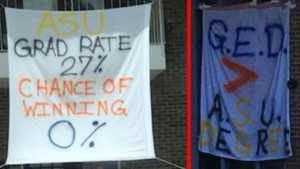 Auburn University officials have released a statement after banners were seen on campus as the Auburn Tigers hosted Alabama State for the first time on Saturday.

Photos of the banners have been posted on Facebook. One, which was apparently displayed at the Sigma Pi fraternity house, said “ASU Grad Rate 27% Chance of Winning 0%”.  Another banner said “G.E.D. > A.S.U. Degree”.

The banners prompted Auburn officials to say in a statement, “Auburn University is committed to upholding a nurturing community supportive of fundamental dignities and promoting integrity, responsibility and mutual respect. We take seriously all reports of potential student conduct policy violations and investigate them fully to uphold the values and standards of the Auburn family.”

The Latest: Saints to allow family members for Packers game