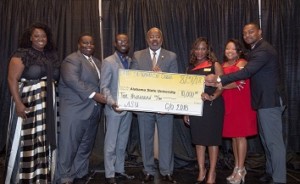 Alabama State University celebrated a group of distinguished alumni recently in a gala event held in the ballroom of the John Garrick Hardy Student Center.

The ’50 Under 50′ Class for 2018 were presented and received their awards before a cheering crowd of family and friends, as well as members of its inaugural class.

“We are so excited to present this new class and to welcome back those who were a part of the first class of 50 Under 50 last year,” said Jennifer Anderson, ASU’s director of Development and executive director of the ASU Foundation. “The awardees were selected based on their professional accomplishments and/or their support of their alma mater. The awards are a means of honoring them as ambassadors of the University and recognizing their accomplishments in their chosen professions.”

The 2018 class took the opportunity to show their support of ASU by presenting a check for $10,000 during the event. Class member, Dr. Tanjula Petty, spearheaded the giving component.

“It was a great opportunity for us to show our support collectively for O’ Mother Dear,” Petty said. “This University has poured so much into us, and making sure that we contribute to the upkeep of our alma mater is a priority for the members of our class.”