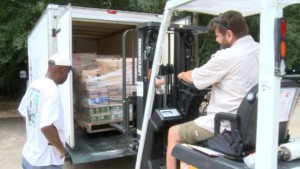 A fund raising campaign is underway to help a Selma non-profit that’s on a mission to stamp out hunger.

The Selma Area Food Bank supplies food to about 65 different agencies that distribute food to people in need.

The food bank serves Dallas, Marengo, Perry and Wilcox counties — an area of the state known for its high poverty rate.

Jeff Harrison is the executive Director.

The goal of the campaign is to raise $1600 dollars for the food bank.

Harrison says that amount could be used to buy more than five tons of food.

Anyone who would like to join in the effort to raise money for the food bank can go to www.redbasket.org — and search for the Selma Area Food Bank.