TODAY THROUGH THE WEEKEND: Little change in the overall thinking of the forecast as Alabama’s weather will trend hotter and drier in the coming days. We will be in the ring of sinking air on the periphery of Hurricane Florence, meaning afternoon showers should be few and far between. The chance of any one spot getting wet each day is in the 10/20 percent range, otherwise we are forecasting partly to mostly sunny days and fair nights. Highs will be in the lower to mid 90s through Sunday. The big rain shield associated with Hurricane Florence should remain east of Alabama despite recent tracks towards the west in the track. 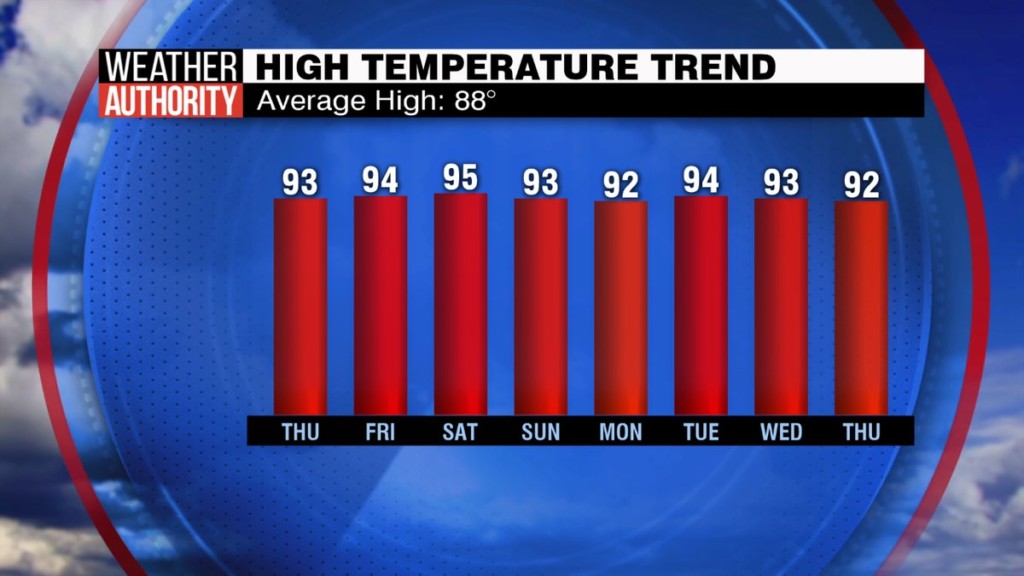 NEXT WEEK: The forecast for next week could change a bit to start the week, depending how far west Florence decides to drift, and could possibly increase our rain chances, especially for eastern sections of the state. If no rain, expect mainly sunny weather with highs in the lower 90s.

FOOTBALL WEATHER: Auburn hosts LSU Saturday afternoon (2:30p CT kickoff) at Jordan-Hare Stadium… the sky will be mostly sunny with a kickoff temperature near 90 degrees, falling into the upper 80s by the fourth quarter. The chance of a shower is not zero, but very low.

Alabama travels to Oxford to take on Ole Miss Saturday evening (6:00p CT kickoff)… the sky will be mostly clear. The temperature will fall from near 88 at kickoff, into the low 80s by the final whistle. 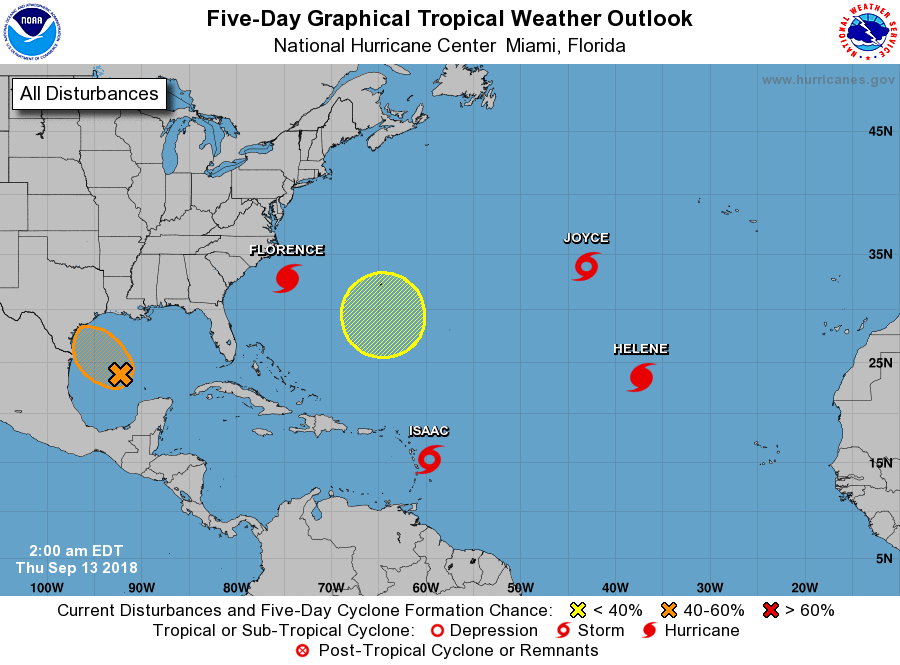 FLORENCE: At 500 AM EDT (0900 UTC), the center of Hurricane Florence was located near latitude 32.8 North, longitude 74.7 West. Florence is moving toward the northwest near 15 mph (24 km/h), and this general motion, accompanied by a gradual decrease in forward speed, is expected to continue through today. A turn to the west-northwest and west at an even slower forward speed is expected tonight and Friday, and a slow west-southwestward motion is forecast Friday night and Saturday. On the forecast track, the center of Florence will approach the coasts of North and South Carolina later today, then move near or over the coast of southern North Carolina and eastern South Carolina in the hurricane warning area tonight and Friday. A slow motion over eastern South Carolina is forecast Friday night through Saturday night. Maximum sustained winds are near 110 mph (175 km/h) with higher gusts. Little change in strength is expected before the center reaches the coast, with weakening expected after the center moves
inland. Florence is a large hurricane. Hurricane-force winds extend outward up to 80 miles (130 km) from the center and tropical-storm-force winds extend outward up to 195 miles (315 km). A NOAA buoy located about 80 miles (130 km) south of the center of Florence has recently reported sustained winds of 52 mph (83 km/h) with a gust to 64 mph (104 km/h). The estimated minimum central pressure is 956 mb (28.23 inches). 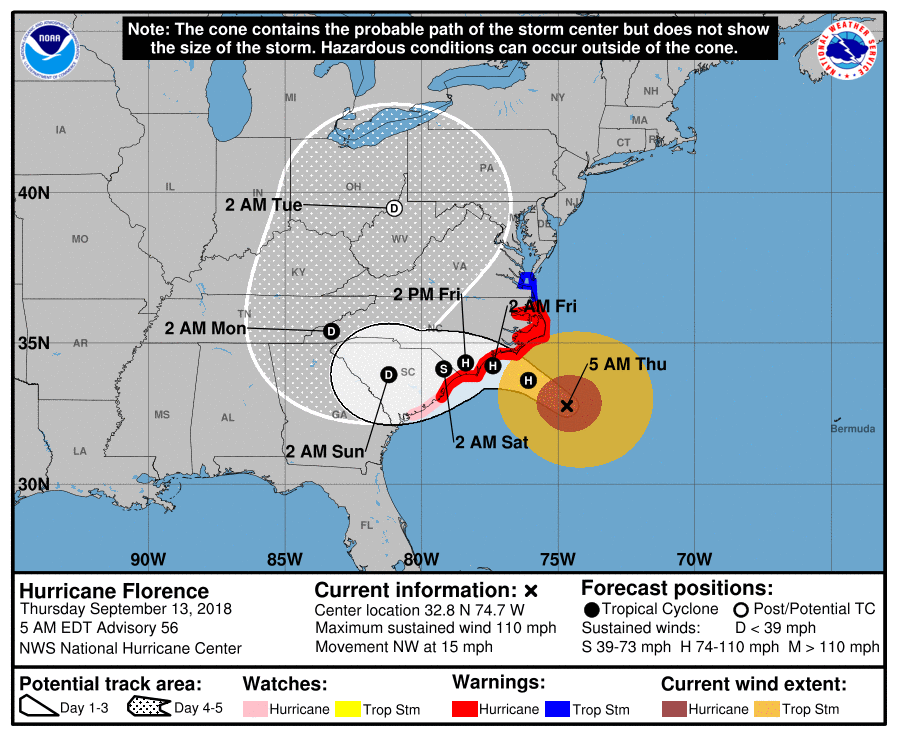 1. A life-threatening storm surge is now highly likely along portions of the coastlines of South Carolina and North Carolina, and a Storm Surge Warning is in effect for a portion of this area. All interests in these areas should complete preparations and follow any advice given by local officials.

2. Life-threatening, catastrophic flash flooding and significant river flooding is likely over portions of the Carolinas late this week into early next week, as Florence is expected to slow down as it approaches the coast and moves inland.

3. Damaging hurricane-force winds are likely along portions of the coasts of South Carolina and North Carolina, and a Hurricane Warning is in effect. Strong winds could also spread inland into portions of the Carolinas.

HELEN: At 500 AM AST (0900 UTC), the center of Hurricane Helene was located near latitude 23.5 North, longitude 37.3 West. Helene is moving toward the north near 14 mph (22 km/h). A turn toward the north-northeast with an increase in forward speed is expected tonight followed by a turn toward the northeast over the weekend. Maximum sustained winds have decreased to near 75 mph (120 km/h) with higher gusts. Continued weakening is forecast over the next couple of days, and Helene is expected to become a tropical storm by tonight. Hurricane-force winds extend outward up to 45 miles (75 km) from the center and tropical-storm-force winds extend outward up to 175 miles (280 km). The estimated minimum central pressure is 986 mb (29.12 inches).

ISAAC: At 500 AM AST (0900 UTC), the center of Tropical Storm Isaac was located near latitude 15.4 North, longitude 59.7 West. Isaac is moving toward the west near 17 mph (28 km/h). This general motion is forecast to continue for the next several days. On the forecast track, Isaac is forecast to move across the central Lesser Antilles and into the eastern Caribbean Sea later today, and then move across the eastern and central Caribbean Sea through the weekend. Earlier data from a NOAA Hurricane Hunter aircraft indicate that maximum sustained winds are near 45 mph (75 km/h) with higher gusts. Little change in strength is expected over the next several hours as Isaac moves through the Leeward Islands. Gradual weakening is forecast after that as Isaac moves through the eastern Caribbean. Tropical-storm-force winds extend outward up to 160 miles (260 km)
from the center. The estimated minimum central pressure is 1006 mb (29.71 inches).

JOYCE: At 500 AM AST (0900 UTC), the center of Subtropical Storm Joyce was located near latitude 33.8 North, longitude 43.1 West. The storm is
moving toward the southwest near 6 mph (9 km/h). A slow southwestward motion is expected for the next couple of days. A turn toward the northeast with a rapid increase in forward motion is forecast to occur over the weekend. Maximum sustained winds are near 45 mph (75 km/h) with higher gusts. Some slight strengthening is possible during the next couple of days. Joyce could become a tropical storm within the next day or so. Winds of 40 mph extend outward up to 80 miles (130 km) from the center, mainly to the northwest. The estimated minimum central pressure is 1006 mb (29.71 inches).

ELSEWHERE IN THE TROPICS: A trough of low pressure is located over the central Gulf of Mexico. Although associated shower activity remains limited, upper-level winds are forecast to become more conducive for the development of a tropical depression before the system reaches the western Gulf coast on Friday. An Air Force Reserve Hurricane Hunter aircraft is scheduled to investigate the disturbance later today, if necessary. Regardless of development, heavy rainfall and gusty winds are expected across portions of northeastern Mexico, Texas, and Louisiana late this week. Interests there should monitor the progress of this system, and refer to products from their local weather office. Formation chance through 48 hours…medium…60 percent.

An area of low pressure is expected to develop near Bermuda late this weekend or early next week. Some gradual development is possible after that time while the system drifts westward over the western Atlantic. Formation chance through 5 days…low…20 percent.

Next name up for use, Kirk.