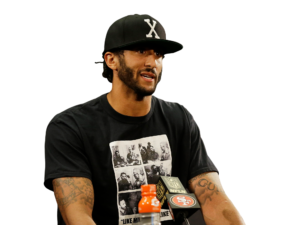 A Mobile pastor has cut up a Nike headband and wristband before his congregation to protest the company partnering with former NFL quarterback Colin Kaepernick.

Reports say Rev. Mack Morris told his congregation Sunday that he had bought his last pair of Nikes. Morris says his actions are in protest to the apparel company’s advertising campaign that features Kaepernick, who knelt during the national anthem at football games to protest police brutality.

Morris says no one’s saying how much Kaepernick is earning from Nike “simply because he won’t stand when the national anthem is sung.” Morris received a standing ovation from his parishioners. This comes as some others denounce Nike’s move, including a Louisiana mayor who last week banned the purchase of Nike products at city booster clubs.