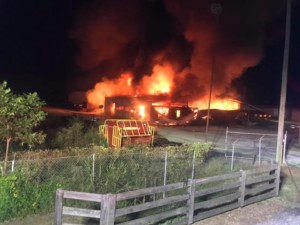 Capt. David Hughes of the Pike Road Fire Department says smoke could continue to rise from a fire at the Feed Lot store on Meriwether Road for several days.

Hughes said via Facebook on Saturday that the fire itself is contained and is not a danger to nearby buildings. There were no injuries reported. As of Sunday, a cause of the fire hasn’t been announced.

The Feed Lot is a store in the historic section of the town of Pike Road. It sells feed, seed, agricultural products and is an Ace Hardware location. It opened in 1979, according to its website.

The fire in the overnight hours of Saturday morning brought out the Rolling Hills and South Montgomery Fire Departments to assist Pike Road.

Pike Road fire officials say people were driving around barriers and running over their fire hoses. They ask that drivers obey the barriers and avoid the hoses.