One Dead, Two Hurt in Shooting at Riverchase Galleria in Hoover

One Dead, Two Hurt in Shooting at Riverchase Galleria in Hoover 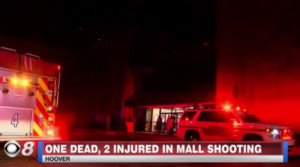 A man was shot and killed by a police after a fight at the Riverchase Galleria mall in Hoover, which resulted in gunfire that injured a teen and a 12-year-old girl.

A police statement said the shooting occurred shortly before 10 p.m. Thursday night. Riverchase Galleria is the largest mall in Alabama and a top destination for shoppers.

The statement said two Hoover officers in the mall confronted a 21-year-old man from Hueytown with a gun and one of the officers shot and killed him. His name has not been released.

An 18-year-old was taken to a Birmingham hospital for treatment of serious injuries.

Capt. Greg Rector said in a news conference a 12-year-old girl struck by gunfire was hospitalized. She was reported in stable condition at Children’s Hospital.

The mall reopened earlier this morning.