It’s been 3 years this month, since drivers have been able to pass on county road 32 in Macon county without being turned around by a “road closed” sign. 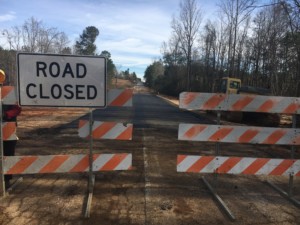 This is what it looked like last June — nearly a year and a half later.

“It looked like a war zone, it looked like dynamite had exploded in it” said Macon County EMA director Frank Lee.

He and and other officials told Alabama News Network  they were frustrated that the repairs were delayed for so long– and were relying on answers from the state and federal emergency management agencies.

“I think there was a lot of mis-communications between the agencies, the county the state and the federal agencies, and after a series of agencies we kind of came to some kind of agreement ” he said Wednesday, standing on  newly paved section of the road that was once dilapidated.

In late October, Lee says, crews finally began rebuilding the bridge, with some much needed upgrades. “The bridge is actually underground… so this is a much better structure” he explained. He said the new bridge is better designed to withstand sever flooding.

Re-opening the road will not only be a relief to nearby residents, but will cut down on response time for emergency officials that once used the road as the fastest route to the interstate.

Guard rails, will need to be added before, the roads will be open for travel at the end of the month, Lee clarified “I want to make it perfectly clear that it shouldn’t be traveled at this time…it’s not safe, there are safety precautionary measure have not been place”

Officials are aiming to have the guard rails in place, and the road opened by December 22nd, that will mark three years since the bridge was destroyed by flooding.