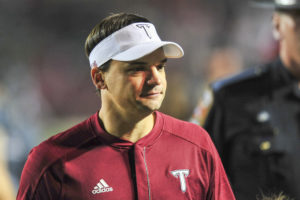 Two people familiar with the situation say West Virginia and Troy’s Neal Brown are completing a deal to make him the next coach of the Mountaineers.

The people spoke to The Associated Press on condition of anonymity because the contract was not yet final. Brown would replace Dana Holgorsen, who this week left West Virginia to become Houston’s coach.

Yahoo! Sports first reported West Virginia and Brown were close to a deal.

The 38-year-old Brown has coached Troy since 2015 and is 35-16 at the Sun Belt school. His teams have produced impressive performances against Power Five competition, winning at Nebraska this season and at LSU in 2017. The Trojans also lost 30-24 at Clemson in 2016, the season the Tigers won the national title.
___