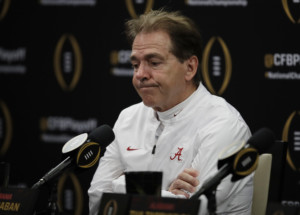 What had been a perfect ride for #1 Alabama became a season that slammed into a brick wall as the Crimson Tide fell 44-16 to #2 Clemson in the College Football National Championship Game at Levi’s Stadium in Santa Clara, California.

“Well, obviously we’re all very, very disappointed,” Alabama Coach Nick Saban said in his postgame news conference. “But I’d like to say that I’m very, very proud of what our team was able to accomplish this year, to win 14 games, win the SEC, win the Orange Bowl, have an opportunity to play for the National Championship, really proud of our players, really proud of our team. And I don’t think that one game necessarily defines who you are, and that’s certainly what I’d like for our players to know,” he said.

Clemson freshman quarterback Trevor Lawrence passed for 347 yards and three touchdowns. The victory clinched Clemson’s 15-0 season, becoming the first team in the AP poll era, which started in 1936, to win 15 games in a season. Alabama finishes the year at 14-1.

It was the fourth consecutive playoff meeting between the Tigers and Tide. Clemson evened the series and beat Bama for the national title for the second time in three seasons.

“Got to congratulate Clemson,” Saban said. “They did a very, very good job. Their quarterback is really good, their skill players are really good. We actually stopped the run pretty well and created enough third-down situations, we just couldn’t get off the field on third down, couldn’t capitalize on our opportunities that we had on offense,” he said.

Coach Nick Saban and Alabama had been looking for a sixth national championship in 10 years, trying to add to their already unprecedented run. Instead, Clemson crushed Alabama, becoming the first opponent to beat the Tide by more than 14 points since Saban became coach in 2007.