State Auditor Jim Ziegler says he has a plan to address Alabama’s road and infrastructure needs without increasing the gas tax.
It’s called “Plan Z” and he says it will create $900 million in new road construction funds. 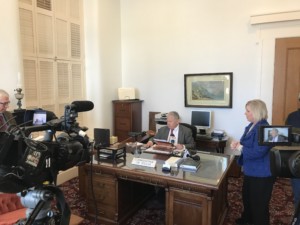 Zeigler wants to start by using $63.5 million a year that he says is being taken out of the highway budget and used for other things to help initiate a 20 year bond.  He estimates that will create $900 million in funds for roads and bridges.   He also wants to conduct a full management audit of ALDOT.  He sent this plan to all members of the legislature Monday.

“You’ve got something like a fourth of the legislature that are brand new members, I’m giving them a way to avoid having to vote on a tax increase as their first major vote,” he explained.

Zeigler also laid out how the $63.5 million could be made up to the General Fund.  He says revenue growth and cutting administrative costs at most state agencies by around 1.5% are two solutions.  He also says the legislature could pass a bill making the balance on unused gift cards go directly to the general fund.

“If the card has its own expiration date then at that point the consumer loses its money and it would go to the state general fund, rather than the issuer,” Zeigler shared.

Zeigler says he is confident this will get a fair hearing in the legislature.  He also sent the plan to Governor Ivey’s office.  We reached out Governor Ivey and ALDOT for reaction to Zeigler’s plan.  So far, we have not heard back.