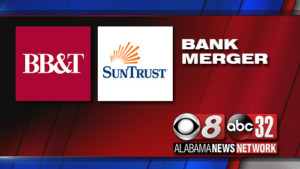 Southern regional banks BB&T and SunTrust are combining in an all-stock deal valued at about $66 billion.

The banks said Thursday that the combined company will be the sixth-largest U.S. bank based on assets and deposits. It will have approximately $442 billion in assets, $301 billion in loans and $324 billion in deposits serving more than 10 million households.

The combined company will be based in Charlotte, North Carolina, its board and management evenly split between BB&T Corp. and SunTrust Banks Inc. A new name will be chosen before the deal closes in the fourth quarter. BB&T is headquartered in Winston-Salem, North Carolina, while SunTrust is based in Atlanta.

BB&T entered the Montgomery market in 2009, when it took over the assets of Colonial Bank, which was based in Montgomery, but had failed during the recession. Colonial had more than 300 branches in Alabama and several other states, which instantly made BB&T a large player in the local banking industry.

According to the SunTrust website, it operates a handful of ATMs in Montgomery.

(Copyright 2019 The Associated Press contributed to this report. All rights reserved. This material  may not be published, broadcast, rewritten or redistributed.)