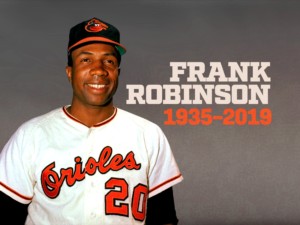 Hall of Famer Frank Robinson, the first black manager in Major League Baseball and the only player to win the MVP award in both leagues, has died. He was 83.

Robinson had been in hospice care at his home in Bel Air. MLB confirmed his death Thursday.

Robinson hit 586 career home runs and won the Triple Crown while leading the Baltimore Orioles to their first World Series championship in 1966.

An All-Star outfielder in 12 seasons, his legacy extended far beyond the batter’s box.

Robinson fulfilled his quest to become the first African-American manager in the big leagues when the Cleveland Indians hired him in 1975. In his first at-bat as their player-manager, he hit a home run.

Robinson also managed San Francisco, Baltimore and Montreal. He became the first manager of the Washington Nationals after the franchise moved from Montreal for the 2005 season.

Robinson was the NL MVP with Cincinnati in 1961 and Baltimore in 1966. The Reds, Orioles and Indians have retired Robinson’s No. 20 and saluted him with statues at their ballparks. He’s also in the Nationals’ Ring of Honor.