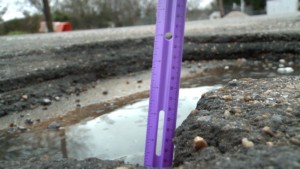 Potholes have become a major problem in the city of Selma.

It’s a problem residents say has mostly been ignored by city leaders.

Selma residents say the city has too many raggedy roads and a whole lot of potholes.

They say some potholes stretch along streets while others cut across. They’re located on major thoroughfares — and on side streets.

It’s a problem residents say — has been ignored by city officials.

“They cruise through town all the time,” said William Blakes.

“They are the ones that should be doing something about it because they see it. So, if they are ignoring it we need to make sure we do not help these elected officials get back in.”