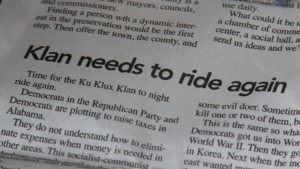 An editorial in a Linden newspaper has residents there defending their town.

Residents say it’s the latest in a series of racially charged headlines and articles — to be published in the Democrat-Reporter.

The editorial calls for the Klan to “ride again” and people to be lynched to clean up Washington DC.

Many black residents have cancelled their subscriptions to the paper — and a lot of local businesses no longer carry it.

“Blacks and whites get along. We have fun together. We party together. It’s just him basically,” said Byron Wolf.

“I think its crazy, I honestly do. I think he needs to get out that type business that he’s in,” said William Sheffield.

“Let somebody else do it. Cause he’s not doing anything but stirring up trouble, that’s what he’s doing.”

The Democrat-Reporter has been the local paper in Linden for more than a hundred years.