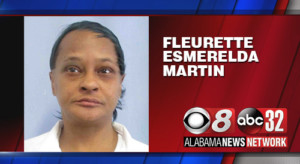 Alabama News Network has learned that an escapee from Montgomery has been recaptured. The Alabama Department of Corrections says 48-year-old Fleurette Esmerelda Martin was caught around 7:30 this morning in Birmingham by the Birmingham Police Department.

Martin was reported missing after corrections officials say she left her assigned job location at approximately 1:00 Monday morning. She had been sentenced in 2008 to a 13-year term for robbery in Jefferson County. She was serving her sentence at the Montgomery Women’s Facility.