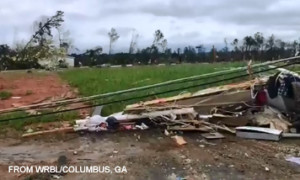 Photo from damage in Beauregard, Alabama. (From WRBL)

Alabama News Network is on the scene in Lee County, where multiple fatalities have been reported in the wake of the severe storms and likely tornadoes that moved through the state earlier this afternoon.

The fatalities are reported in the Beauregard area of Lee County, well south of Auburn/Opelika. A tornado may have moved through that area. There were two storms that prompted tornado warnings over central Lee County, causing damage in Beauregard and east into Smiths Station, where a cell phone tower was toppled and a bar was damaged.

No other details have been released regarding these deaths. Stay with Alabama News Network for updates.

The Latest: USL : 4 positive out of 1,400 Championship tests

The Latest: Governor says California getting a grip on virus