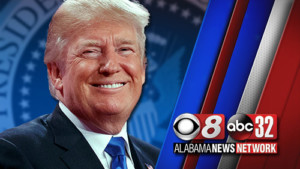 President Trump is scheduled to tour tornado damage in Lee County today.  The Beauregard community south of Opelika was hit by an EF-4 tornado on Sunday, killing 23 people.

The President’s specific schedule isn’t being released to the public. But he is expected to arrive before noon. Earlier this week, the President signed a federal disaster declaration for Lee County, which means federal dollars will be coming to the area to help survivors in their recovery.

Other elected leaders, including Gov. Kay Ivey, Sen. Doug Jones and Congressman Mike Rogers, have toured the area themselves this week.

Stay with Alabama News Network on CBS 8 and ABC 32 for Live coverage of the President’s visit.