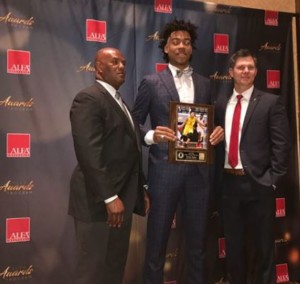 The state’s returning Gatorade Player of the Year, the 6-foot-9, 225-pound senior forward led the Spartans to a 31-3 record and a third straight Class 7A state championship this past season. Watford averaged 23.7 points, 11.2 rebounds, 4.1 assists, 3.1 blocks and 2.5 steals per game, including 22 points and 11 rebounds in the title-game win over Baker High. A three-time Class 7A State Tournament MVP, Watford is a McDonald’s All-American and was named the state’s Mr. Basketball as a junior. He concluded his prep basketball career with 3,567 points, which ranks sixth in state history, in addition to setting a new state record with 1,888 career rebounds.

Watford has volunteered locally at the Birmingham Exceptional Foundation, serving mentally and physically challenged individuals, and has also donated his time to elementary school literacy-outreach programs and as a youth basketball coach. “Trendon has the ability to play inside or outside,” said Donnie Quinn, head coach of Spain Park High. “He can shoot the 3 and is a great finisher around the basket, even against bigger players, plus he plays the point against the press. But his greatest assets are his passion and his leadership.”

Watford has maintained a B-plus average in the classroom. He remains undecided upon a collegiate destination.

As a part of Gatorade’s cause marketing platform “Play it Forward,” Watford also has the opportunity to award a $1,000 grant to a local or national youth sports organization of his choosing. He is also eligible to submit an essay to win one of twelve $10,000 spotlight grants for the organization of choice, which will be announced throughout the year.

To learn more about the Gatorade Player of the Year program, check out past winners or to nominate student-athletes, visit www.Gatorade.com/POY, on Facebook atwww.facebook.com/GatoradePOY or follow us on Twitter at www.twitter.com/Gatorade.