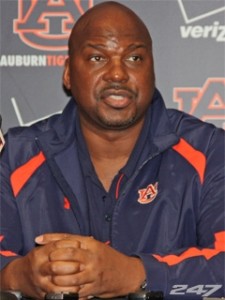 Manhattan U.S. Attorney Geoffrey S. Berman said: “As he has now admitted, Chuck Person abused his position as a coach and mentor to student-athletes in exchange for personal gain. In taking tens of thousands of dollars in cash bribes, Person not only placed personal financial gain above his obligations to his employer and the student-athletes he coached, but he broke the law.”

According to the Complaint, the Indictment, statements made in court and publicly available documents:

Over the course of a year, Person, a former men’s basketball coach at Auburn University until shortly after his arrest, agreed to accept cash bribes in return for agreeing to exert his influence over student-athletes on the Division I men’s basketball team he coached to retain the services of the bribe-payers, including once the student-athletes entered the National Basketball Association (“NBA”).

Beginning in 2016, and continuing into September 2017, when Person was arrested, Person received approximately $91,500 in cash bribes from a financial adviser and business manager, who, unbeknownst to PERSON, was providing information to law enforcement (“CW-1”). In exchange for the cash bribes, PERSON agreed to exert his influence over certain student-athletes Person coached at Auburn University to retain the services of CW-1 once those two players entered the NBA. The bribe payments are alleged to have been initially arranged by a co-conspirator who had a preexisting relationship with PERSON and operated a clothing store that specializes in making bespoke suits for professional athletes.

Over the course of the scheme, and in exchange for the cash bribes described above, Person did, in fact, arrange multiple meetings between CW-1 and Auburn players and/or their family members. In those meetings, PERSON falsely touted CW-1’s qualifications as a financial adviser and business manager without disclosing that PERSON was, in fact, being bribed to recommend CW-1. In one recorded meeting, PERSON stressed to an Auburn University player the importance of keeping their relationship with CW-1 a secret. Person stated, “most important part is that you . . . don’t say nothing to anybody . . . don’t share with your sisters, don’t share with any of the teammates, that’s very important cause this is a violation . . . of rules, but this is how the NBA players get it done, they get early relationships, and they form partnerships.” Person later told that player that CW-1 would purchase him a separate cell phone over which they could communicate so as to conceal the nature of the scheme.

Person, 54, of Auburn, Alabama, pled guilty to one count of conspiracy to commit bribery. As a condition of his plea, Person agreed to forfeit $91,500. The charge carries a maximum term of five years in prison. The maximum potential sentence in this case is prescribed by Congress and is provided here for informational purposes only, as any sentencing of the defendant will be determined by the judge. Sentencing is scheduled for July 9th, before Judge Preska.

Mr. Berman praised the work of the FBI and the Special Agents of the United States Attorney’s Office for the Southern District of New York.

The case is being handled by the Office’s Public Corruption Unit. Assistant United States Attorneys Robert L. Boone, Aline R. Flodr, Noah Solowiejczyk, and Eli J. Mark are in charge of the prosecution.