Auburn Makes Final Four for the First Time, Next Up: Virginia 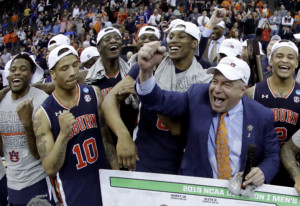 The Tigers continue to roar in the NCAA men’s basketball tournament in a run that has now brought down the winningest program of all.

Bryce Brown scored 24 points, Jared Harper and Anfernee McLemore made the plays that mattered in overtime, and the fifth-seeded Tigers rallied from a 10-point hole to beat second-seeded Kentucky 77-71 on Sunday to earn the Auburn program its first trip to the Final Four.

Harper finished with 26 points for the Tigers, who roared through Kansas and North Carolina just to reach the finals of the Midwest Region.

Next up for Auburn is Virginia, who the Tigers will play in Minneapolis on Saturday. Tipoff is at 5:09PM CDT.  You can watch the Final Four on CBS 8.