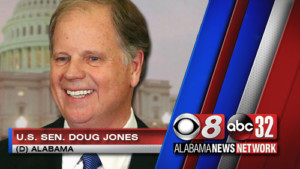 A new Mason-Dixon poll shows Alabama voters are split in rating the job performance of U.S. Sen. Doug Jones, who is the only Democrat to hold statewide office.

The poll shows 45% of those asked approve of the job he’s doing, compared to 44% who disapprove and 11% who weren’t sure. In a deep-red Republican state like Alabama, Jones might be encouraged as he seeks a full term next year.

But when asked whether they would vote to re-elect Jones or replace him with a Republican candidate, 50% said they would prefer a Republican to hold the seat. 40% want to keep him and 10% aren’t sure.

Mason-Dixon asked Republican voters which potential candidate would win their support. These were the overall statewide results:

However, 25% are undecided.  Former Chief Justice Roy Moore is the one whom Jones defeated to win the seat in a 2017 special election.

Brooks, Byrne and Palmer are Congressmen. Marsh is president pro tem of the Alabama Senate. Tim James is a Greenville businessman who ran for governor in 2010 and is the son of former Gov. Fob James.