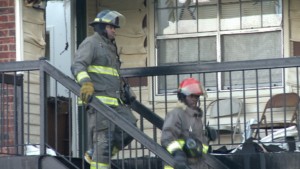 Eight units at Chanticleer Apartments were destroyed by the fire — Tuesday evening.

Seven single mothers and about 25 children — lost nearly everything they had.

Officials say no one was seriously hurt in the fire.

But one woman had to jumped from the second floor of the building — to get to safety.

“The roof started caving in so I had to go the opposite way. When I looked down the steps and seen all five of my kids was looking up at me so, that’s when I took the jump,” said Savannah Jackson.

Fire officials say the cause of the fire remains under investigation.