While unemployment is at historic lows in some parts of the state, it’s still high in West Alabama. And the effort to bring those numbers in line with the rest of the state — continues.

The 23rd Annual Dallas County DHR Job Fair in Selma put employers and job seekers under one roof in the city with the state’s highest unemployment.

“I think there were a lot of good options. A lot them were assembly line factory jobs which isn’t for me, but they did have a lot of jobs that were for me such as front desk jobs at medical clinics, part time substitute jobs. I think they had a nice range of jobs for everyone,” said Jaela McDonald.

Dallas County has the fourth highest unemployment rate in the state at 6.3 percent. 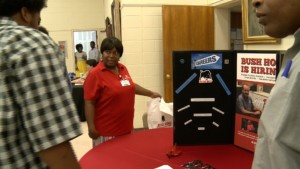