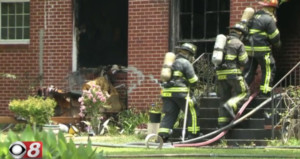 Montgomery Fire/Rescue is reporting the second fire fatality of 2019. The victim, a 93-year-old man, died this morning in a hospital of injuries he suffered in the fire on Wednesday.

The fire happened in a home in the 3400 block of South Perry St. Investigators say they had performed a successful initial resuscitation.

Investigators say four people were taken to the hospital. An additional person was treated and released on the scene. There were no firefighter injuries reported.