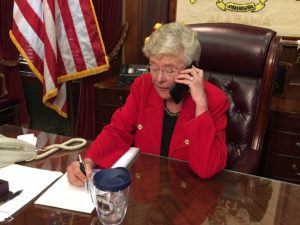 Alabama Gov. Kay Ivey is not saying whether she intends to sign a proposed abortion ban into law.

Ivey told reporters Wednesday that she will review the legislation approved by lawmakers Tuesday night before announcing her decision. She says potential legal fees should not deter “efforts to protect the unborn.”

The Alabama Legislature has given final approval to the nation’s most restrictive abortion law in the country, a measure that makes performing abortion at any stage of pregnancy a felony.

Supporters say they hope to create a court case to challenge the 1973 Roe v. Wade decision that legalized abortion nationwide.