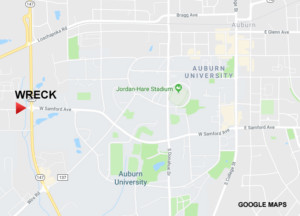 Here are the details of the wreck that killed Rod Bramblett, the Voice of the Auburn Tigers, and his wife Paula Saturday night. This information comes from the Auburn Police Department:

Last night at 6:08PM, Auburn police, fire, and paramedics responded to a two-vehicle crash on Shug Jordan Parkway at the intersection of West Samford Avenue.

Police say the Brambletts were in a 2017 Toyota Highlander that was hit from behind by a 16-year-old male driver in a 2011 Jeep Grand Cherokee.

The Brambletts and the teenage boy were taken to East Alabama Medical Center by ambulance. Paula Bramblett died at the EAMC emergency room from internal injuries. She was 52.

Rod Bramblett was airlifted to UAB for treatment. He died there of a head injury. He was 53.

Lee County Coroner Bill Harris says alcohol was not a factor. The cause of the crash remains under investigation by the Auburn Police Division.

Stay with Alabama News Network for updates on the investigation.