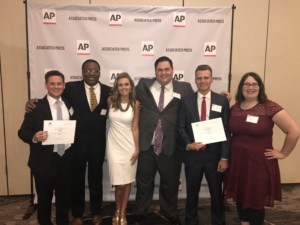 Some of the members of Alabama News Network who were present to receive awards from the Alabama Associated Press.

The Alabama Associated Press has honored Alabama News Network with several awards for journalism excellence. The awards were presented at a luncheon at the Birmingham Marriott on Saturday.

For “Best Spot News”, a team of Andrew James and Jerome Jones won third place for “Gateway Park Armed Robbery”, as a man told us his harrowing account of how he was accosted and robbed at one of Montgomery’s city parks.

For “Best Documentary”, Alabama News Network won third place for “Top 8 Stories of 2018”, our annual news special that looks back at the most important news stories that happened in our area over the past year.

We are honored to receive this recognition and to bring you News From Where You Live every day. We also want to congratulate the other news outlets across the state that received awards this year.