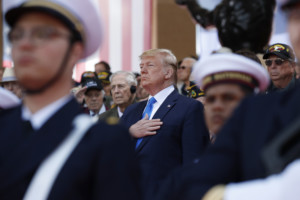 Thousands of people and a handful of surviving U.S. D-Day veterans are gathering at the Normandy American Cemetery in France to honor thousands fallen in the pivotal invasion 75 years ago.

Veterans themselves took places on the stage where President Trump and French President Emmanuel Macron are to speak, to the sound of wartime American songs and military music.

About 12,000 people were expected at the ceremony. Macron will award five U.S. veterans the Legion of honor, France’s highest distinction.

President Trump has greeted World War II veterans, some covered with blankets against the chill, as he prepared to participate in a ceremony commemorating the 75th anniversary of D-Day.

According to speech excerpts released by the White House, Trump will laud the 130,000 service members who participated in the invasion as the “citizens of free and independent nations, united by their duty to their compatriots and to millions yet unborn.”

At a moving ceremony Wednesday in Portsmouth, England, from which the 1944 invasion was launched, Trump recited some of the prayer that President Franklin D. Roosevelt delivered to a worried nation just getting word of the fighting.

Many people commemorating D-Day’s 75th anniversary worry that the sacrifices of the pivotal World War II invasion are being forgotten.

And that’s why they gathered at dawn Thursday all along Normandy’s landing beaches, holding flags, staring into the waves or thinking of the first waves of soldiers falling in the hail of German fire on June 6, 1944.

Richard Clapp, a 44-year-old former U.S. paratrooper and computer store owner from Julian, North Carolina, says: “If you forget history, it is doomed to repeat itself.”

Mike Connor, a 43-year-old Ford truck maker from Louisville, Kentucky, carried a black-and-white photo in his shoulder pocket of his great-uncle, John Connor, who fought in the Battle of the Bulge.

Arnold Omitt, a 52-year-old of Mesa, Arizona, described “a sense of appreciation for a whole generation of people who came here and liberated the continent from Nazi tyranny.”