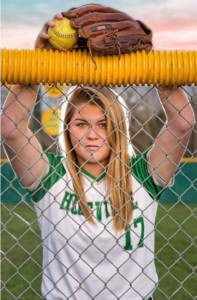 The 5-foot-11 senior right-handed pitcher and first baseman led the Bulldogs to a 41-12 record and the Class 4A state tournament this past season. Dismukes compiled a 33-7 record with a 1.23 ERA, along with a.587 batting average, 23 home runs and 70 RBI. She struck out 316 batters and walked just 34 in 211.1 innings pitched. Dismukes is a four-time All-State and four-time All-Metro selection.

A devoted member of her church community, Dismukes has volunteered locally on behalf of community clean-up initiatives and youth softball programs. “Dismukes is a phenomenal athlete in every aspect of the game,” said Virginia Barber, head coach at Stanhope Elmore High. “She’s tough on the mound and I believe she leads the state in home runs. She’s also a special person, the kind of teammate that everyone should be.”

Dismukes has maintained a 3.21 GPA in the classroom. She has signed a National Letter of Intent to play softball on scholarship at Auburn University this fall.

As a part of Gatorade’s cause marketing platform “Play it Forward,” Dismukes also has the opportunity to award a $1,000 grant to a local or national youth sports organization of her choosing. She is also eligible to submit an essay to win one of twelve $10,000 spotlight grants for the organization of choice, which will be announced throughout the year.