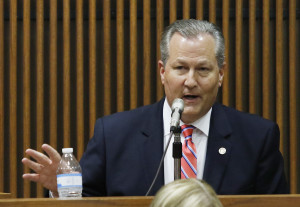 Today marks the third anniversary of a dramatic change in Alabama politics. It’s the day that House Speaker Mike Hubbard was convicted of ethics charges.

Hubbard had been one of the most powerful politicians in the state, until June 10, 2016, when a jury in Lee County decided that he used his office for personal gain — which meant his automatic removal from power.

The investigation into Hubbard lasted three years. There were three weeks of testimony in his trial.

Hubbard was sentenced to four years in prison, but has remained free while his case is being appealed.

Last year, a state appeals court upheld 11 of his 12 convictions.

Just last week, the Alabama Supreme Court heard arguments in his appeal. We don’t know when the Supreme Court might issue its decision.