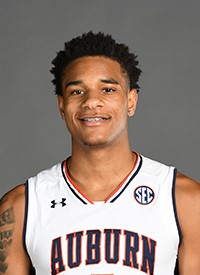 The Orlando Magic have selected Auburn forward Chuma Okeke with the 16th pick of the NBA draft, adding a player they hope will bolster the team’s frontcourt depth.

The Magic are coming off a 42-40 finish, the team’s first playoff berth in seven years and drafted outside that lottery for the first time since 2012.

They selected sixth or higher in five of the previous six previous drafts, although only three of those picks – Aaron Gordon (2014), Jonathan Isaac (2017) and Mo Bamba (2018) remain on the current roster.

In Okeke, the Magic believe they acquired someone who has a chance to develop into a productive player but not necessarily contribute a lot as a rookie.

A knee injury sidelined the 6-foot-8 forward during Auburn’s run to the Final Four last season.

Okeke, 20, averaged 12 points and 6.8 rebounds per game as a sophomore for the Tigers.