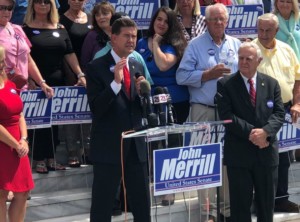 Alabama Secretary of State John Merrill has just announced he is running for U.S. Senate in 2020.

There has been speculation for weeks about him running, but today he made it official. The announcement came before hundreds of supporters and a strong media presence.

Merrill says that people have been approaching him about the seat for months now and his decision came after no candidate came out that he thought would represent Alabama’s best interest in Washington.

Merrill becomes the sixth candidate to enter the race on the Republican side. The 2020 primary election is set for March 3rd.